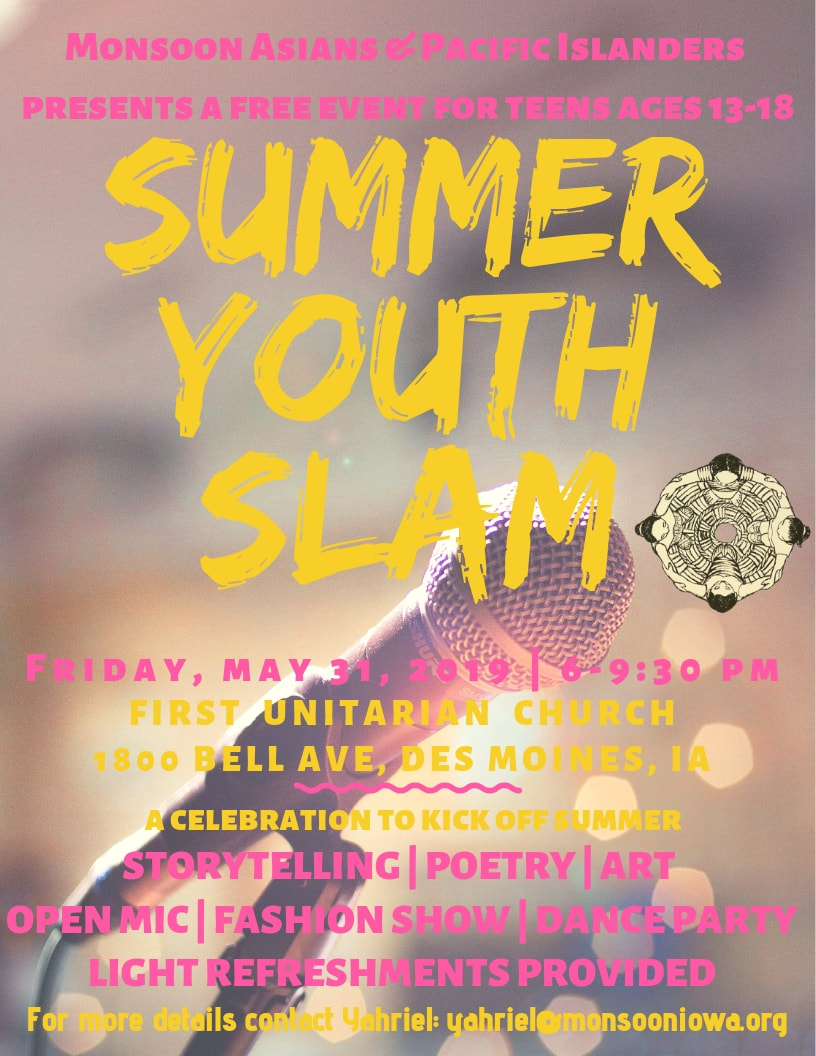 Kick your summer off right and come to the First Unitarian Church at 6pm on Friday, May 31, 2019 for  storytelling, poetry, art, open mic, fashion show, and a dance party!

What's love got to do with it: a teen dialogue on relationships 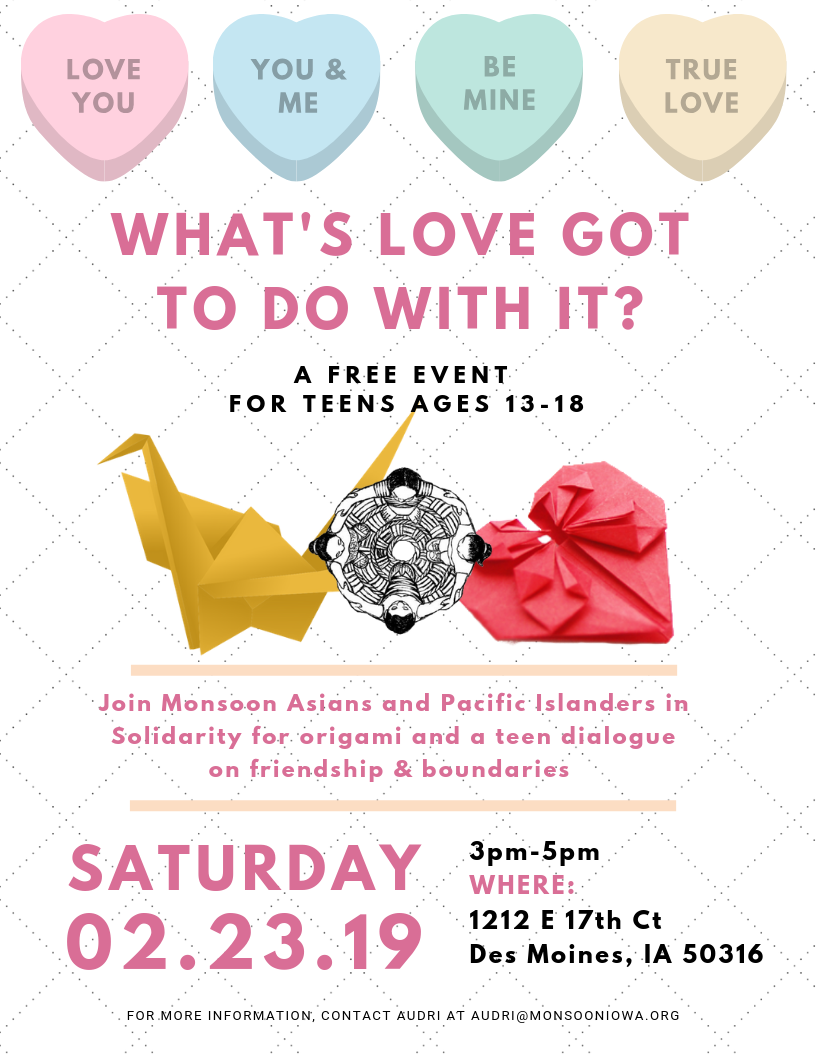 On Saturday, February 23, 2019  Monsoon's Violence Prevention Program held a workshop for Teen Dating Violence Awareness Month called What's Love Got to Do With It: A Teen Dialogue on Friendship & Boundaries. It was free and open to teens ages 13-18!

The Violence Prevention Program gave a short presentation and then facilitated a dialogue on teen friendship & boundary issues. Afterwards, a guest art teacher gave a tutorial on how to make origami.

Thank you to everyone who came  and took part in the event!  And a big thank you to sponsors and donors!
On Sunday, December 9th Monsoon Asian and Pacific Islanders in Solidarity (“Monsoon”), in partnership with Iowa Homeless Youth Center (“IHYC”), held a community event raising local awareness to the intersection between violence and homelessness. Held at Grand View University, Wash Away Violence & Homelessness Laundry Drive and Blanket Making Workshop featured presentations, small group breakouts, and a large group discussion about the intersection between violence and homelessness and different things the community can do to help with these issues.
After a short presentation introducing the work that both Monsoon and IHYC complete along with the purpose of the day’s event, the activities began with an icebreaker illustrating how homelessness is a lot closer than it may seem to each of our lives. Participants were asked to stand if they or anybody they knew identified with a series of statements that represented risk factors of homelessness. These risk factors included living paycheck to paycheck, identifying with LGBTQ (especially if the person thought of is not supported by their family), struggling with substance abuse, experiencing physical, sexual, verbal, or emotional abuse at home, and struggling with mental health issues.
After this opening activity the event divided into three breakout groups to have small group discussions while making fleece blankets that would be donated to the Iowa Homeless Youth Center. The discussions centered around homelessness and violence, their connection, their causes and effects, stigma surrounding both, and what we as a community could do to create change. A representative from IHYC also went between groups to answer questions about the organization’s mission and programs.
The event concluded with a large group discussion where members from each group shared different group perspectives and takeaways. Overall, it was an insightful experience as one participant explained, “It really opened my mind to these issues that I thought were more national and showed that they’re a lot closer to home than you would normally think.”

This document was supported by a grant by   RALIANCE, a collaborative initiative to end sexual violence in one generation, made possible through a commitment from the National Football League (NFL).  Its contents are solely the responsibility of the authors and do not necessarily represent the official views of the NFL.
​ 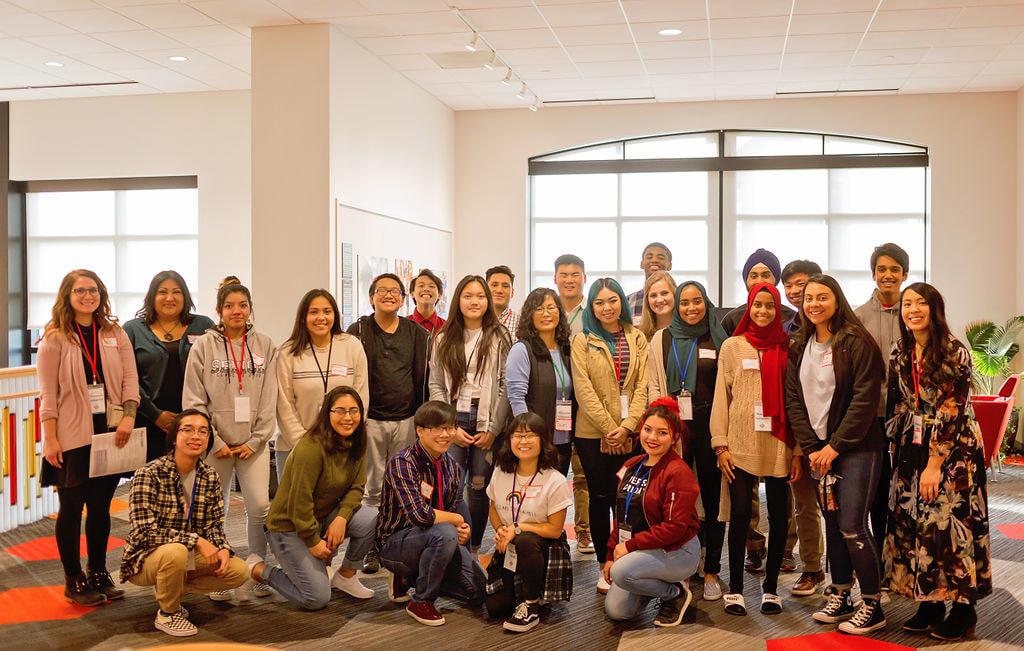 thank you to our sponsors:
​

And Then They Came  For Us: Monsoon Film Screening | October 6th, 2018 @ Des Moines Varsity Theater 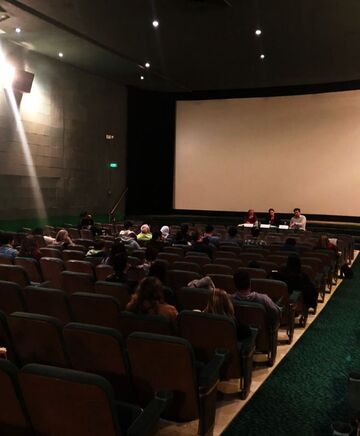 On Saturday, October 6, 2018, Monsoon Asians & Pacific Islanders in Solidarity hosted a screening of the award-winning documentary And Then They Came for Us, a film by social justice filmmaker Abby Ginzberg, at the Varsity Theater in Des Moines.

The documentary recounts how during World War II, the government received authorization to forcibly incarcerate innocent people of Japanese descent into isolated camps. This resulted in a mass removal of 120,000 Japanese Americans across the United States, beginning the process of the violation of their constitutional rights.

Featuring rediscovered photographs by Dorothea Lange, the film follows Japanese American activists as they recall their experiences in the concentration camps and speak out today against current issues surrounding a Muslim registry and travel ban, which echoes the World War II internment of Japanese Americans.

Following the screening, a panel discussion took place discussing the film and how it connects to current issues of national security and immigration policies. The event was successful and all proceeds from the event went towards Monsoon victim services.
​
Powered by